This $235 million metrics driven, privately-held construction company wanted to extend beyond traditional HR metrics to assess how well the financial resources spent on human capital were performing. The CEO and CHRO became aware of the Vienna HCA approach to human capital analytics and wanted to pilot test the relevance and value of the approach to their organization.

We calculated productivity and HC ROI results for a two year period. Here is a table showing the results of the analysis. 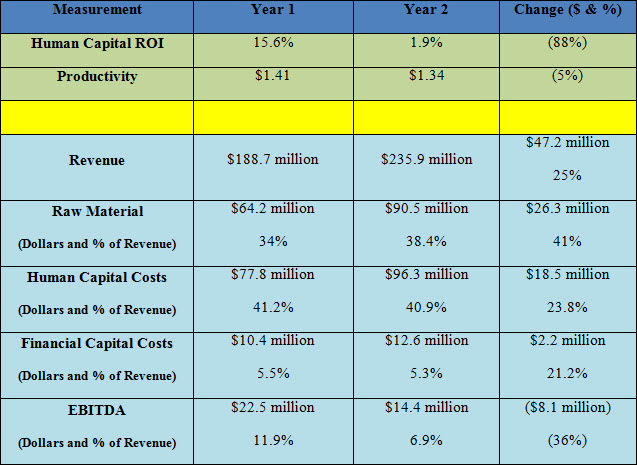 It turned out that the cost of raw material was increasing at a rapid, disproportionate rate due to the price of oil, yet the company did not reflect the increased material costs in their pricing of projects. Thus, EBITDA declined, driving down HC ROI; and productivity declined due to the disproportionate increase in raw material costs. Note, human capital costs actually declined as a percentage of revenue from year 1 to year 2. Thus, despite a reduction in both productivity and human capital ROI, human capital costs were not a driving factor.

Because the company was able to isolate the factor driving the reduction in human capital ROI and productivity they implemented both human capital and business process changes to effectively address these results.

As a former CFO who relied heavily on metrics to help support the management of disparate business. I welcome Vienna's contribution to the management toolkit. For too long, managers have been limited by their inability to quantify, at an organization level, the contribution of their human capital to the success of their business. Vienna introduces us to a new way to measure and track our progress toward improving not only the efficiency, but also the effectiveness of an organization's human capital." From a former CFO … END_OF_DOCUMENT_TOKEN_TO_BE_REPLACED